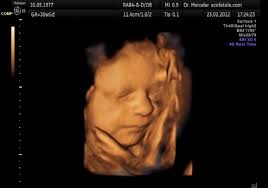 To all expecting parents out there, pregnancy ultrasounds has never been this exhilarating – and real. With the entry of 4D Scan in Pretoria, Jo’burg, Germiston, and more places to come soon, there’s a “bundle of reason” be excited like a little kid. Before we even delve into the scintillating facts about 3D/4D scans, let’s get a few basics out of the way.
What actually is 4D Scan?
Sometimes called 4D Bonding Scan, 4D Scan is a non-invasive ultrasound procedure that isn’t painful at all. As you might expect, it uses the same technology as your gyno to deduce 3D images from the information relayed from the ultrasound machine. Of more importance, however, is that the term “4D” in reality refers to 3D images that are somewhat are moving in real-time. The experience is simply out of this world. Imagine viewing your fetus yawning or waving inside you. Impressive, right? Here are other amazing facts about 4D Scan in Germiston and other locations.
Is 4D Scan Safe?
Yes, you bet. 4D Scan in Johannesburg is a non-invasive procedure, meaning that it doesn’t tamper with the fetus and its internal environment. The whole procedure is state-of-the-art, tried and tested multiple times. In fact, it had to go through years of clinical trial to ascertain its safety. Oh yeah, it 100% sound and safe.
Will it Show the Gender of the Baby?
That is another resounding yes. Unlike traditional ultrasound machine that can detect baby’s gender in later trimesters, 4D Scan in Pretoria can tell if its a boy or a girl by the 14th week. If the fetus is in a favorable condition, you can get the gender even earlier than that.
Is 4D better than 2D & 3D?
That’s right. 2D Scan can only render a grayscale image that is typical of yesteryears’ ultrasound scans. In principle, 3D Scan offers surface-rendered image. It’s brownish-coloured image that is visible of your baby. Again, 4D is actually 3D in real-time. It's only with 360 video technology that these machines can render the images. The result is quite a sight.
Can I Get a Record?
Yes, you can get a 4D photo printed or 4D video recorded. The good news is that the final footage can be viewed using any gadget ranging from laptops to smartphones and everything in between.
How Long Does it Last?
4D Scan in Johannesburg will only take about 30 minutes tops. That includes full diagnostic ultrasound as well as 4D and even 3D scans. Unexpected, right? Well, the technology behind 4D Scan in Germiston is not only snappy but also robust to make the whole process effortlessly easy.